These terms sound pretty similar, but they are different, very different – and the distinction in respect to living with grief is crucial.

It seems that ‘moving on’ has positive connotations. Moving on means you are being strong, courageous, putting the negative stuff behind you and facing the future with a positive outlook and a bright smile.

Many bereaved become frustrated with the notion that we should ‘move on’. Observations such as in this recent published research bearing the headline that “two years, one month and four days is the time it takes to feel better following bereavement” is incredibly unhelpful, implying that there is some kind of time limit on grief.

And what does ‘better’ mean, anyway?

That you’re better than you were in the raw early days? As in better able to function as a human being once the shock has worn off.

That your behaviour is ‘better’ – or more favourable – than the earlier days? This is often more about others wanting to be able to take away your pain – well meant but futile – as well as about other people’s discomfort with responding to your pain. Grief can make the bereaved rather ill-tempered and unreliable for various reasons. We don’t like that behaviour either but we have little choice but to find a way to live with it.

That you’re ok now? Life carrying on as normal. Phew, that’s over, as you were!

‘Better’ is such a subjective term, grief such a personal journey that is different for everyone its use in such an article is pointless.

(The article is actually more helpful than the headline implies, arguing the case for more bereavement support and for people in general to feel more comfortable talking about death, but which do people remember more? The hyperbolic headline, or the boring old facts in the article?)

Perceived time limits on grief can lead to comments such as “Ooh, she never got over the loss of [child, spouse, parent etc]”.

Well, the truth is you don’t. Perhaps some people might be better at hiding their pain, and sorrow. They might put it away in a little box inside their mind, but just because it is not talked about, it does not mean it has gone away.

I love this quote from the wonderful Megan Devine of Refuge in Grief. She organises the invaluable Writing Your Grief course I did a few months ago. She hits the nail right on the head.

‘Moving on’ from losing Hugo has never been my goal. Hugo is my child. I loved him for every second of his life, and I shall love him for every remaining second of my life.

There is no moving on from that.

For the first few months, my priority was survival. There were times when I felt even simple survival was beyond my grasp, such was the pain that I feared would never, ever end.

It is why I work so hard on Hugo’s legacy. I am connected to him every moment of every day, I know, whether or not Hugo’s legacy exists.

I do not need to prove my love for Hugo, but making a difference for others is my way of carrying my love for him.

It gives his life and mine meaning.

Gradually, I have learnt to feel less guilty about feeling happy, or doing something just for me. A smile on my face does not mean I feel ‘better’. I am all too aware that a bad day or a trigger is always just around the corner, and I have an armoury of self-care tactics to try and manage them.

The image below, from Tonkin’s Model of Grief is a succinct representation about moving forward with grief. 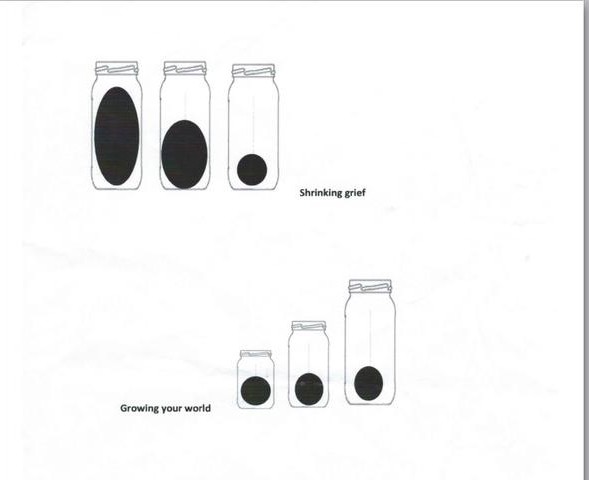 The top row of jars on the top represents the popular view that over time, grief shrinks, becomes less overwhelming, takes up less space in our lives.

The bottom row shows the reality: that grief stays more or less the same over time. The shape of grief – the way it looks from the outside – may change a bit, but ultimately it’s the same size. Grief remains the same even as our world after bereavement grows larger.

To sum up, the diagram is a brilliant visual way of demonstrating that we don’t ‘get over’ or ‘move on’ from the loss of a loved one. Instead, we find a way of carrying the loss with us, living with our grief, dealing with our triggers – of moving forward with our lives.

‘Moving forward’ is a phrase I prefer to ‘new normal’. What is ‘normal’ anyway? Life evolves, ebbs, flows. It is not that you move from one ‘normal’ to another ‘normal’ and stay there.

‘Moving forward’ requires resilience. Resilience is the understanding (learnt the hard way) that life will not always go your way, that crappy stuff will happen to you and to the ones you love, but finding ways to not let it keep you down. Finding ways to keep you moving forward.

14 Comments on Moving Forward, Not Moving On

1Pingbacks & Trackbacks on Moving Forward, Not Moving On