Sunday morning seems to be a good time for resonant posts to be shared on Facebook; posts that prompt lots of thought and make me a bit emotional.

Last week was the video of Alison Cameron’s speech, and today it was this post about post-traumatic growth (PTG). To quote the article, PTG is “the phenomenon of people becoming stronger and creating a more meaningful life in the wake of staggering tragedy or trauma. They don’t just bounce back—that would be resilience—in significant ways, they bounce higher than they ever did before.”

This was the part that made me especially emotional:

The term PTG was coined in 1995 by Richard Tedeschi, Ph.D., and Lawrence Calhoun, Ph.D., psychologists at the University of North Carolina, Charlotte. “We’d been working with bereaved parents for about a decade,” Richard says. “They’d been through the most shattering kind of loss imaginable. I observed how much they helped each other, how compassionate they were toward other parents who had lost children, how in the midst of their own grief they often wanted to do something about changing the circumstances that had led to their child’s death to prevent other families from suffering the kind of loss they were experiencing. These were remarkable and grounded people who were clear about their priorities in life.”

None of these parents, Richard stresses, believed that their child’s death was a good thing. They would have given up all their newfound activism, insights and altruism, their re-ordered sense of what really matters in life, to have their child back. “The process of growth does not eliminate the pain of loss and tragedy,” Lawrence says. “We don’t use words like healing, recovery or closure.” But out of loss there is often gain, he says. And in ways that can be deeply profound, a staggering crisis can often change people for the better.

Unlike the parents described in the article, nothing could have been done to have prevented Hugo’s death. However, as I have said numerous times, there is no ranking system. I might not be able to prevent other families suffering the same kind of loss (while I have been working to raise awareness of preeclampsia and HELLP syndrome, they are both thankfully very rare), but I can help prevent other families suffering the kind of additional, avoidable pain and distress mine experienced because of a lack of appropriate support.

That is what Hugo’s legacy is all about.

I love that the quote states they don’t use words like ‘healing, recovery, or closure’. In my view – and shared by many other bereaved parents – that these things are not possible.

We know that nothing will or can bring our children back. Things may, over time feel ‘better’ but they will never ‘be better’. We may seem to have ‘recovered’ outwardly, but the grief is always lurking beneath the surface, ready to re-emerge without warning. There is no such thing as ‘closure’ – Hugo will always be missing from my life, I shall always love him and miss him with all my heart.

Nothing can ever replace him. I too would give up all my insights and altruism to have him back in my arms. No hesitation. In a heartbeat.

That is why comments such as I described in this post are so very hurtful. That comment is just a representative example. It demonstrates how we need to look differently at grief, trauma, and how we (the wider ‘we’ – culture and society) work with those who have experienced grief and trauma and work together constructively, collaborating and learning from each other to make a positive impact on the world.

I will leave the final word with this powerful quote from the article:

“[PTG] promises,” he writes, “to radically alter our ideas about trauma— especially the notion that trauma inevitably leads to a damaged and dysfunctional life.” 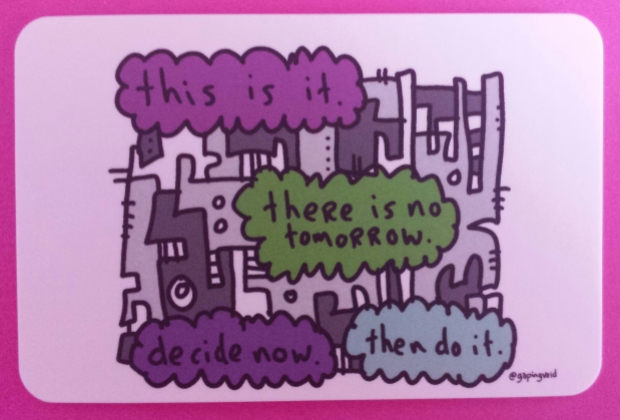