Home » Contemplations » This Girl Can, Too

For most of my life I avoided exercise, thinking I was too fat. With poor self-esteem and body image, I thought exercise was only for those with long, lithe legs and flat tummies. I still don’t have long, lithe legs, and nor do I have a flat tummy, but I am now voluntarily running 5 kilometres a couple of times a week. What is that all about?

For the last few months I had been half-heartedly running on the treadmill. At first, I was struggling to run for two minutes, but had progressed 20 minutes, with a distance just shy of 4km.

Last Wednesday, I decided to give a 5km a go, but to relax and see what happened. I put the speed on the treadmill to 9.5, nice and steady. When I got to 15 minutes, I increased the speed by 0.1 every minute until I got to 10 at 20 minutes. After that time, I was into unchartered territory. At 23 minutes, I was really struggling and slowed down to a walk for two minutes to get my breath back. By 25 minutes, I was back running again, increasing the speed to 10.5. A strand of hair had escaped from my ponytail and the sweat was dripping down it, tickling my neck. My legs and lungs were begging for mercy.

At 31.47 I saw the distance counter tick over to 5km. I was overjoyed.

I was so proud, I recorded the event in my diary, and awarded myself a gold star.

My reluctance to take part in sport began at school: with puppy fat, being clumsy, a daydreamer, and having poor hand-eye coordination (no self-deprecation here, it’s all true), I didn’t get on well with the traditional school sports of netball and hockey. I was always picked last, which cemented my belief that I was hopeless at physical activity. I did after-school dancing class, and swimming, but there were always girls who were better at both than me – and these were the girls with long, lithe legs and flat tummies, not like dumpy little me (so I thought.)

During the formative years of my life, I had a constant belief that if only I was slimmer and taller, I would be able to [insert ambition here].

Fast forward a few years, and I am living in Auckland, New Zealand. I haven’t grown any taller, sadly, but I am getting slimmer. While I am generally more active than I have ever been, I have also discovered running. Martin and I started by running up and down the road next to where we lived in Mt Eden, and we then progressed to running up the volcano the suburb is named after (don’t worry, the volcano has been dormant for centuries). I lost loads of weight, and was the slimmest I have ever been.

On returning home to the UK, I continued to run. I took part in the Race for Life, running the 5km in a fairly decent time of 25 minutes or so.

Me after running a Race for Life, in about 2006. I was classed as ‘overweight’.

The funny thing was, being slim did not give me the self-confidence I so craved. Weight loss isn’t a magic concept that can change your mindset in itself, I discovered.

The weight began to reappear after an accident on a walking holiday in the French Alps. The day after our arrival in Chamonix, we set about walking the Grand Balcon Nord. Martin and I were both pretty fit, but we found the walk up much harder than we realised – the altitude was a bit of a shock to the system, too. As I mentioned earlier, I am clumsy, and on the way down I slipped and twisted my knee. 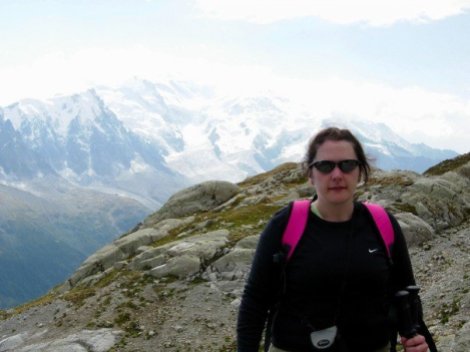 Me at Lac Blanc. I was too knackered to smile: sensible people get the cable car to Plan Praz and walk up from there. Not us.

Well, most sensible people would say “Oh dear, I had better rest my knee so it gets better.” Not me. A trip to the pharmacy sorted me out with anti-inflammatory painkillers and a knee brace, while an outdoor shop equipped me with a pair of walking poles. I carried on with the holiday as though my knee was fine.

You don’t need to be a knee specialist to figure out that was not very wise. You will also not be surprised to discover that my knee took a very long time to heal.

While my knee was healing, the running and other activity in the gym I had previously been doing became very difficult. Even when my knee had recovered, I developed a psychological aversion to the treadmill, thinking I couldn’t do it and besides, it was deathly boring. I didn’t change my eating habits, and the weight piled on.

But you know what? Due to a variety of factors while my weight increased, my self-confidence soared.

The trouble for my waistline was I now did not want to equate my self-confidence of body self-image with my weight or dress size. I was awesome no matter how much I weighed! I started achieving the ambitions the younger me thought would be possible only if I was slimmer, and taller (I’m still only 5’2″).

I am a comfort eater, and during the past year since Hugo died I have had a very good excuse to comfort eat. However, I was feeling uncomfortable and bloated. Eventually, I came to the realisation that all the chocolate and cake in the world is not going to give me back my son. In addition, the HELLP syndrome and pre-eclampsia that necessitated Hugo’s very premature birth, and that caused his death often causes the mum to get cardiovascular disease in later life.

Today, I am a dress size 14 to 16, and the body mass index (BMI) chart tells me I am ‘obese’. How rude. To be honest, even when I was running before my knee incident, and a dress size 10 to 12, I was still classed as ‘overweight’. BMI is only one indicator of health and fitness. 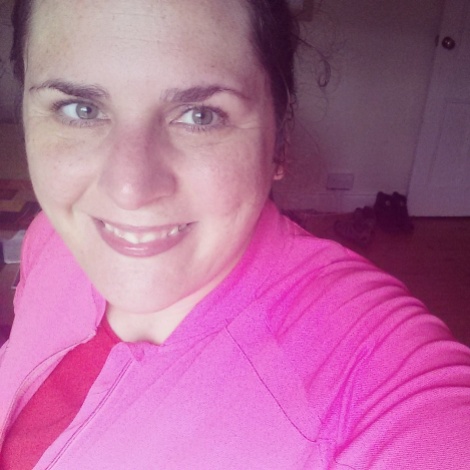 Me, after a recent workout. I believe the polite term is ‘glowing’.

I have returned to exercise, in Hugo’s honour – prolonging my life, when life was denied to my precious boy. Imagining Hugo was saying “Come on Mummy, you can do it Mummy” helped me during the 5kms I have run this week (I repeated the feat last Sunday, shaving 10 seconds or so off the time). I have returned to running as a mark of respect to my body – I nearly experienced multiple organ failure and after Hugo was born I recovered physically very quickly. I need to keep my body physically strong.

Already, I am feeling better. My tummy is less bloated, my waist is returning to its former hourglass shape, my legs feel firmer. I am comfortably back in my pre-pregnancy jeans. I still eat cake and chocolate – life is too short not too indulge a little. It is about balance.

I love the new This Girl Can campaign. I wish it had been around when I was younger, so I could see I  didn’t need long, lithe legs and a flat tummy to go out and do sport. That I can exercise, even with bits that jiggle.

That this girl can, too.

35 Comments on This Girl Can, Too

2Pingbacks & Trackbacks on This Girl Can, Too